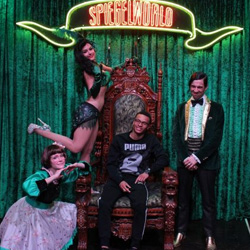 Canadian Olympic sprinter Andre De Grasse was spotted attending the hit show ABSINTHE at Caesars Palace On Friday, December 16, 2016. The 2016 Rio de Janeiro silver medalist was seen taking in ABSINTHE’s outlandish acts and hilarious antics during the 10 p.m. performance. Andre shares his enjoyment of the performance and took a photo with The Gazillionaire, his raucous assistant Joy Jenkins and the “Green Fairy,” Melody Sweets.

The night prior, Dec. 15, Texas Rangers first baseman Prince Fielder put it all on the line when he was challenged to a lap dance competition by The Gazillionaire, honorably defeating his opponent and winning free shots of Absinthe.