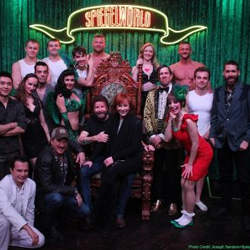 Award Winning country music star and Caesars Palace headliners, Reba McEntire with Kix Brooks and Ronnie Dunn of superduo Brooks & Dunn, were spotted attending the hit show ABSINTHE at Caesars Palace On Thursday, Dec. 8, 2016. In town for an installment of their famous residency, “Together in Vegas” at The Colosseum, the trio was seen taking in ABSINTHE’s outlandish acts and hilarious antics during the 10 p.m. performance. After the performance, they went backstage for photos with the full company and to share their enjoyment of the performance.