Bellagio
– California Chardonnay and Pinot Noir: A Tasting of Balance, Saturday, April 25: This exciting and academic tasting will feature four member vineyards of In search of Balance, a company striving to advertise balanced (and scrumptious!) pinot noir and chardonnay. Joining the panel is going to be Rajat Parr of Domaine de la C?te, Jasmine Hirsch of Hirsch Wineries, Matt Licklider of Lioco and Steve Matthiasson of Matthiasson. The expert panel will talk about food and wine combinations, wine making as well as their meaning of balance. Moderated by Bellagio Director of Wine and Master Sommelier Jason Cruz with color commentary by Bon App?tit Wine Editor David Lynch, this tasting of eight wines will certainly entertain.

Caesars Palace
– Finish It Off: The Grand Tasting After Party, Friday, April 24: Join your preferred celebrity chefs of Las vegas Uncork’d and also the acclaimed editors of Bon App?tit to sip sparkling Champagne cocktails only at that Very important personel Las vegas Uncork’d Grand Tasting after party at Fizz Vegas. A goody for that eyes and also the palate, the exclusive lounge at Caesars Palace boasts the non-public art assortment of Mister Elton John and the partner, David Furnish, who designed the lavishly elegant space.

Festival-goers can boost their experience at Las vegas Uncork’d by Bon App?tit with two exclusive packages offered at MGM Grand and Caesars Palace.

For a full list of remaining events and to purchase tickets, please visit VegasUncorked.com.

About Bon App?tit
Bon App?tit is where food and culture meet. The award-winning No. 1 food lifestyle brand covers food through the lens of fashion, travel, technology, design and home. Under editor in chief Adam Rapoport, the brand has been nominated for 17 National Magazine Awards, including wins in 2014 for General Excellence and Photography; 10 James Beard Foundation Journalism Awards; and more than 50 Society of Publication Designers (SPD) nominations for design and photography, including Magazine of the Year. Under vice president and publisher Pamela Drucker Mann, the magazine was named ‘One to Watch’ by Advertising Age in 2014 and Adweek’s Food Magazine of the Year in 2012, 2013 and 2014. 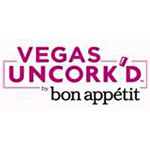