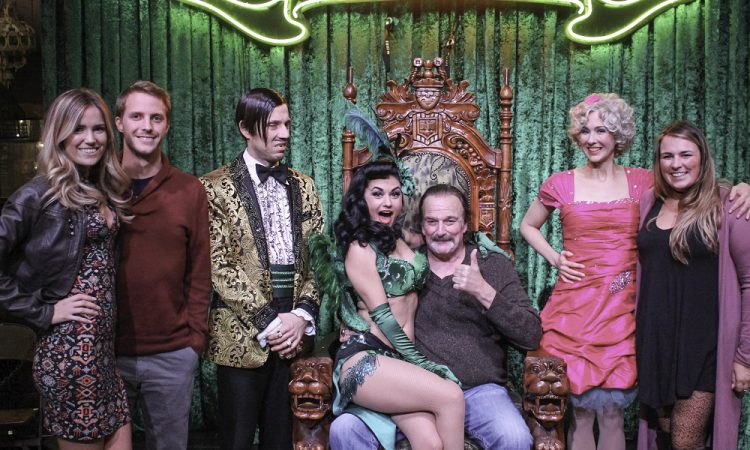 Legendary professional wrestler Jake “The Snake” Roberts, also known as Aurelian Smith Jr., was spotted attending the hit show ABSINTHE at Caesars Palace On Wednesday, Jan. 4. The WWE Hall of Famer was seen taking in ABSINTHE’s outlandish acts and hilarious antics during the 8 p.m. performance. Following the show, The Snake and his family went backstage for photos with The Gazillionaire, his raucous assistant Wendy Widdels and the “Green Fairy,” Melody Sweets, and to share their enjoyment of the performance. ABOUT ABSINTHE: Proclaimed “The Greatest Show on Earth” by Huffington Post, ranked “The #1 Greatest Show in Las Vegas History” by Las Vegas Weekly, and named “Best Show” by Vegas SEVEN, the Las Vegas Review-Journal and more, ABSINTHE at Caesars Palace is a cocktail circus variety show featuring wild and outlandish acts in a theatre-in-the-round presentation. Audiences are treated to a night of imagination and excess, as the cast of eccentrics perform amazing feats of strength, balance, danger and unfathomable flexibility within mere feet of the audience surrounding the intimate stage. ABSINTHE show times are Wednesday-Sunday at 8 p.m. and 10 p.m., with no show on Monday and Tuesday. The schedule is subject to change without notice.